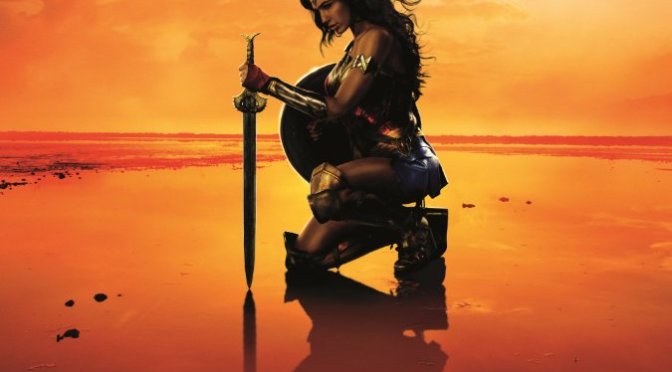 Wonder Woman stormed the box office trenches this weekend to bring in over $100 million domestically.  There’s one reason as to why, it is an absolutely great film.  I had a great time watching this in IMAX because it was a fun summer blockbuster that still contributed social commentary regarding feminism and hope.  So far, Wonder Woman is sitting at the top of Mount Olympus because of the directing, characers, and theme that brought the film together.

Patty Jenkins found a way to deliver the first critically praised film in the DC Extended Universe (DCEU).  The most impressive part of that statement is that this should have been the most difficult to pull off, and granted it may have been.  Patty Jenkins had to deliver an entertaining blockbuster that addressed a sensitive social subject without alienating either side of the issue.  She found the sweet spot in the midst of that daunting task.  As far as making the film entertaining, Patty Jenkins accomplished that through comedic timing, great action sequences, and plenty of hero shots.

The comedy throughout the film really got me because it flowed naturally as part of the characters to further develop the story.  That is almost impossible to pull off because taking a woman from an ancient Greek culture and putting her into a World War I culture sounds more like a Saturday Night Live skit than a compelling film.  As someone who was unlucky enough to see movie about biblical characters time travelling to modern times, I know how awful this type of comedy can get.  For example, the boat discussion about sleeping together should have been a horrible scene that pulled me out of the film.  However, Jenkins used that comedic scene to build the chemistry between Diana Prince and Steve Trevor in a believable way.

The action was unbelievable!  It was awesome seeing Wonder Woman kick that much ass, especially in the village scene.  I don’t know how Jenkins did it, but somehow she gave Wonder Woman a graceful fighting style while still making it feel like Wonder Woman hit like a truck.  Not a small truck like I thought I looked cool in high school, but a giant lifted truck.  That last fight with Ares also showed how tough Wonder Woman is.  She took a beating from him and still kept going.  Not to mention, she definitely flew for a brief second there.  Once Superman finds out she can fly, he’ll probably dump Lois in a heartbeat!

I thought that the color pallates Jenkins used signifantly helped her convey that Wonder Woman is an icon of feminine love, hope and strength.  The color pallatte on her home island of Themyscira was bright and vibrant…basically the place that my dream vacation spot dreams about.  Everything on that island was pure and beautiful to represent Wonder Woman’s pureness and beauty.  The pallatte drastically changed when the setting changed to Europe.  It was dark and dreary to draw attention to mankind’s evil nature.   The contrast between the two pallattes drove home how much Diana’s purity conflicted with the evil in the world.

The camera shots were absolutely fantastic!  I noticed two types of prominent shots throughout the film.  First, there were grand, zoomed out shots primarily used during action sequences.  It made the film feel as if it were a piece of art from ancient Greece.  For example, the beach scene had several slow-motion shots of women flying through the air firing arrows at Nazi soldiers.  The camera was positioned from the side to capture the grand scenery behind the action.  The second shot was the hero shot…and wow were there a lot of them! I mean this is the first feminist icon to get her feature film so what did you expect?!  However, these hero shots were different than male superhero shots.  For males, the camera is generally from a lower angle looking up to give the appearance of dominance.  Many times women use high camera angles to appear soft and sweet…or at least thats what I gathered from my Tinder days.  Jenkins didn’t use either.  She used even level camera shots to show that Wonder Woman has strength while still retaining her loving, soft character.

Wonder Woman – This film works because the Wonder Woman character was executed flawlessy.  Yeah I know, Captain Obvious would even roll his eyes at that statement but it’s true.  Jenkins and Gal Gadot delivered the new gold standard for Wonder Woman.  She is fierce, yet kind; strong, yet gentle.  Jenkins crafted a story to showcase Diana’s true strength, her compassion and loving nature.  Her compassion for mankind fueled her sense-of-mission to permanently leave everyone and everything she had ever known in order save people from Ares’s influence.  Diana’s best character arc moment was when she learned that Ares wasn’t controlling anyone.  She realized that mankind was not innately good.  Her hope and compassion allowed her to see the good in mankind despite their flaws.  Finally, Gal Gadot was the perfect person to cast in this role.  Granted, she won’t be winning an Oscar any time soon, but she embodied the grace and fierceness this character is defined by.  Gadot brought strength and fierceness to Wonder Women without compromising her femininity.  What a…gal!  Am I right?

Steve Trevor – Steve Trevor was the perfect character to introduce Diana to a 1917 London.  Without Chris Pine’s ability to believably deliver lines about the drastic cultural differences between Themyscira and London, the film would have fallen right on its face…Baywatch style.  Chris Pine anchored the film’s silliness while also giving the story a heroic (and “above average”) supporting protagonist.  Jenkins made a great decision to make Steve Trevor incredibly capable and driven soldier.  It would have been easy to make him a bumbling idiot to make Wonder Women appear more heroic.  However, I’m glad Jenkins realized that making her stand out among a fully capable soldier would only highlight her strength.  One of my favorite moments in the film is when He sacrifices himself with the plane to save his friends and all of London.  Jenkins brilliantly executed that scene by pausing on Trevor’s face before he pulled the trigger.  During those few seconds, I saw three emotions on Trevor’s face.  First, he was ecstatic that he actually pulled off stealing the plane.  Second, his expression changed to one of fear knowing that he was about to die.  Finally, it changed to an expression of peace knowing that his sacrifice was going to save potentially millions of lives by ending the war.  That scene was incredibly powerful and demonstrated just how great Steve Trevor’s character was.

Ares – Yeah, I know Ares was barely in the film but I had to mention two deliberate character decisions that gave the film more depth.  First, I loved that it turned out Ares never controlled anyone.  He pushed people along to wage wars with each other in hopes of ending the human race.  That twist forced Diana into an interesting dilemma in that what she was fighting to destroy was part of mankind’s nature.  It took her mission and completely turned it on her head.  Second, I loved that Ares saw himself as a hero trying to rid the world of a corrupted parasite.  Ares believed that mankind’s dark nature was a fire that had to be extinguished.  His belief gave Diana a compelling decision to make.  As a god, I’m sure she saw the logic behind Ares’s actions.  Her decision to still save mankind solidified her belief in mankind’s potential for good.  For these two reasons, Ares was the perfect villain to deliver a powerful story for Wonder Woman’s first of several outings…because after those box office results there will definitely be another one!

I have to point out that there a few minor cons that I noticed during the film.  Don’t get me wrong, these are absolutely minor complaints…nothing that even came close to ruining the movie.  First, there was some very noticeable CGI moments.  That’s not a surprise considering Wonder Woman’s budget was under half of what Batman v Superman received.  It wasn’t horrible, just noticeable.  Second, I thought the slow-motion got a little too 300-esque at times.  Again, I didn’t hate it but I think the action scenes would have played out better without as much slow-motion.  Finally, there were a few moments that I thought were a little cheesy.  For example, Wonder Woman’s final love speech before she went all Emporor Palpatine on Ares was a little too on the nose.  It wasn’t enough to take me out of the film but I could have gone without it.  Those are the biggest criticisms I have, which are nit-picks at best.

Feminism Theme – Jenkins’s ability to convey this theme so effectively made Wonder Woman a standout for me.  I’m not saying that this film changed my life because I’ve always had a Y chromosome, but I can appreciate a theme when it is executed at this caliber.  There were deliberate decisions throughout that story that portrayed how strong women can be.  For example, Jenkins did not make men the enemy or an obstacle to Diana’s power.  Instead, Jenkins highlighted Wonder Woman’s strength rooted in compassion and love while also depicting men as capable warriors.  I admired that approach because it accentuated women’s power without denying men have a different kind of strength.  Women have power in their ability to nurture and love.  They can inspire peace and action through a graceful determination that men don’t have.  You can see this in the trench scene.  Trevor is focused on stopping the war by accomplishing his task.  He doesn’t see people in the village, he sees objectives.  Diana on the other hand, is driven by her compassion and love to save the villagers despite the danger (btw, well done on calling the uncrossable area No-Man’s Land…well done).  Jenkins captured women’s power by portraying Wonder woman as an extremely strong and determined, yet soft and loving character.  After seeing this film, I can understand why Wonder Woman has been a role model for women since she first appeared in 1941.

Overall:  This film was a great entry into the DCEU because it told an amazing story through sensitive themes, great action, and story-driven humor.  I would highly recommend this film be seen in the theater.

Quote of the Week

“What’s the matter?  Never taken a short cut before?”

– Shaun of the Dead

An Analytical Look at Films